As a different way to impose a carbon tax, 11 northeastern states and Washington DC want to enter into a multi-state pact that would impose taxes via a cap-and-trade scheme on gasoline and diesel. The purpose of this is to raise the cost of these transportation fuels so high that no one can afford to use them any more.

TOTAL IMPACT OF TAX IN CONNECTICUT

According to the U.S. Energy Information Administration, Connecticut has done a great job already, reducing its carbon dioxide emissions. As can be seen on this EIA chart, Connecticut’s CO2 emissions have dropped 18.4% from the year 2000 to 2014 (latest year data available). Assuming our current emissions are holding at 2014 levels, that means the $15/ton carbon tax will be applied to 35.1 million metric tons of CO2 emissions (or their equivalent) which is 38.6 million U.S. tons (note the legislation says the tax is applied “per ton” of CO2, not “per metric ton” so we assume it’s a U.S. ton which weighs slightly more than a metric ton). After the tax first goes into effect in 2019, it increases $5/ton per year (a so-called arithmetic increase) thereafter, forever. Here’s the amount Connecticut citizens and businesses will be paying, in aggregate, shown out to 2050:

As one politician allegedly said, “a billion here, a billion there, and soon you’re talking real money.”

“Low-income, households of color, multifamily and renting households spend a much larger percentage of their income on energy bills than the average family,” according to the Natural Resources Defense Council. An across-the-board energy tax is therefore “regressive,” i.e. “African-American and Latino households and renters in multifamily buildings who pay a disproportionate amount of their income for energy” will be greater impacted by such a tax than average- or high-income earners. Moreover, low-income families will have less means to change their energy use to lower-taxed fuels, which are prohibitively expensive to convert to. Now there is a rebate scheme proposed in the legislation where some 50% of the tax will be rebated to individual consumers. But this is a flat rebate where everyone receives the same amount, regardless of income and regardless of energy consumption. So a low-income, high-cost energy user will likely receive as a rebate far less than the tax imposed on them. This is a regressive tax. And as we know, the state has an abysmal history of keeping tax money to balance its budget by raiding trust funds that are supposed to be allocated to consumers or special projects, like transportation.

This website describes many of the direct cost impacts the proposed carbon tax will have. But how will it impact the economy as a whole?

Reporting in 2013, the National Association of Manufacturers (NAM) produced a study here on the effects of a carbon tax on Connecticut’s economy. The tax they looked at was $20/ton of CO2 produced, increasing 4% per year. So while initially larger than the $15/ton being proposed in this year, the current plan would grow much faster, increasing to $60/ton within 10 years while the NAM study assumes the tax will only be $24.23/ton within 10 years (growing 4% per year from a $20/ton start). Even with the tax at less than half what the 2019 bill proposes, NAM forecasts Connecticut will lose 18,000 jobs by year 10 of the tax and economic output will decline .3 percent. We can only assume that with the current bill at over twice the NAM rate, these numbers could do twice the damage that NAM forecasts.

Will the benefits of this carbon tax outweigh the costs laid out in this website? If they don’t, then this is just a “feel good” act that will cost taxpayers billions of dollars and drive companies and jobs out of the state.

Presumably, the purpose of this tax is to change consumption behavior in Connecticut. But we’ve seen huge variations in energy commodity prices that haven’t affected consumption. The EIA, for example, shows that gasoline consumption in Connecticut in 2015 was the same as in 2011, despite prices being more than $1/gallon less. Energy consumption is fairly inelastic. Because of the partial refund residents and businesses will receive under this tax scheme, the incentive to stop using fuels will be reduced as well, which means people will be paying ever higher prices for fuel, which is inflationary. Further inflation will result as the price of every product sold in Connecticut increases as merchants and manufacturers increase prices to account for the carbon tax.

Furthermore, even if this tax resulted in changes in consumption behavior in Connecticut, such changes will have no impact on climate change. As reported in U.S. News & World Report, the Intergovernmental Panel on Climate Change (IPCC) Assessment Report claims that even if the U.S. as a whole stopped emitting all carbon dioxide emissions immediately, the ultimate impact on projected global temperature rise would be a reduction of only about 0.08°C by the year 2050. China and India will dominate global carbon emissions for the next century, and there’s little the U.S., let alone Connecticut can do, to affect this. A Princeton University study likewise predicted that even if all countries stopped emitting CO2 entirely, the Earth would continue to gradually warm, before cooling off.

Connecticut is already doing a good job reducing its carbon footprint, without a carbon tax. As mentioned above, CO2e emissions, as reported by EIA, were 35.1 million metric tons in 2014. That’s down 18.4% from 2000. And the U.S. as a whole is down 7.5% over the same period. This tax is expensive, regressive, and does nothing to help the environment.

Sources for most calculations shown here are from the U.S. Energy Information Administration, and links to those sources are shown below at the bottom of the left column.

Gasoline emits about 19.6 lbs of CO2 per gallon according to EIA, which is 102 gallons per ton of CO2. Since the carbon tax in its first year is $15 per ton of CO2, that means the tax per gallon of gasoline is $0.147 in its first year. Since the average driver buys 656 gallons of gasoline, your annual cost will be $96.43 in the first year of the tax, and since over 1.5 billion gallons of gasoline are sold in the state every year, the total cost of this tax on gasoline for the state will be $235 million. We project these number below for years 1, 5 and 10 of the tax, but remember the tax increases forever, so eventually your cost will be thousands of dollars a year, and the cost of the tax on gasoline for society will be billions per year.

Like we calculated for gasoline above, heating oil produces about 22.4 lbs of CO2 per gallon according to EIA, which is 89.29 gallons per ton of CO2. Since the carbon tax in its first year is $15 per ton of CO2, that means the tax per gallon of gasoline is $0.168 in its first year. About half the homes in CT use heating oil to keep warm, consuming about 438 million gallons, which would incur a total tax in CT of over $73 million. We project taxes through years 1, 5 and 10 below.

Bioheat: This heating fuel is a blend of regular heating oil and vegetable oils (e.g. soy oil or rendered vegetable oil from restaurants). It’s being used now, in blends from 2 – 20%, in heating oil. Biofuels are exempt from the carbon tax, and we believe that your tax will be reduced proportionately according to the percentage of biofuel content in it. To learn more about Biofuels, please visit www.bioheatnow.com.

Diesel fuel shares the same combustion characteristics as heating oil, and so the tax rate will be identical to that of heating oil, as shown below, for the first five years, then years 10 and 20 of the tax. Diesel is primarily used by the trucking industry and according to the American Trucking Association here, some 10.5 billion gallons of diesel fuel are consumed nationwide by 3.6 million Class 8 trucks, yielding an annual consumption of 2,917 gallons of diesel per truck. In the chart below, the tax is applied to this consumption rate and a total annual cost per truck is calculated.

Again, per EIA, natural gas when burned produces 117.1 lbs of CO2 per thousand cubic feet of gas. Since gas on your bills is measured in hundreds of cubic feet (ccf), this number converts to 11.71 lbs of CO2/ccf. A typical home burns about 1000 ccf of natural gas annually, and so emits about 11,710 lbs of CO2 or 5.86 tons of CO2. At a tax rate of $15/ton, a natural gas user would incur an annual cost of about $87.90 in the first year of the tax. Almost half of homes in CT use natural gas for heating, and burn some 253 million cu. ft. every year according to EIA. Doing the math, this results in a total first year tax of $223 million. We show these numbers below projected for years 1, 5 and 10 for natural gas.

It’s interesting to note that Section 1 (b)(5) of the bill requires the state to “determine the amount of carbon dioxide equivalent that is released in the form of escaped methane due to the extraction, transport or distribution of natural gas before the point of consumption in this state and shall add an additional charge to the carbon price for all natural gas or natural-gas-based electricity.” In other words, you’ll also be taxed on leaked gas that you don’t even consume. This is a serious issue, as recently reported by the Sierra Club here.

Like we calculated for other fuels above, propane produces about 12.7 lbs of CO2 per gallon according to EIA, which is 157 gallons per ton of CO2. Since the carbon tax in its first year is $15 per ton of CO2, that means the tax per gallon of gasoline is $0.0953 in its first year. If a home consumes 1,000 gallons of propane annually (heating, cooking, fireplace, grill, etc.) this tax will amount to $95.25 in its first year. We calculate from EIA data that some 110 million gallons of LP gas (i.e. propane) are consumed in CT, which would incur a total tax in CT of over $11 million in the first year of the tax. We project taxes through years 1, 5 and 10 below.

The carbon tax is also imposed on electricity use, but only that portion that is derived from burning coal, natural gas or diesel. Useful information is provided by ISO New England here. This states that for New England as a whole, 49% of electrical generation was from natural gas, 1.1% from diesel, and 1% from coal. The balance is from non-carbon emitting sources such as nuclear and renewables. We therefore calculate the pro-rate input of taxable fuels into the power generation mix to get these results. Furthermore, the natural gas, diesel and coal purchased by power plants will all be more expensive due to the tax and those additional costs to power plants are not reflected in the tax rates below.

These numbers for electricity assumes average houshold use of 12,000 KWhr/year and does not assume electric heating in the winter (baseboard or heat pumps). For costs associated with heat pumps, see www.learnaboutheatpumps.com. 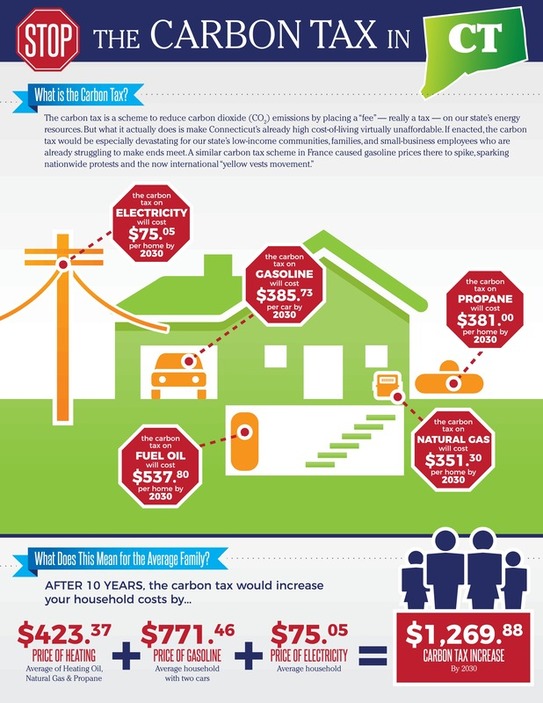 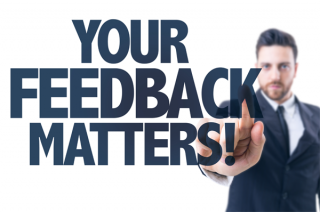 Despite worldwide opposition to a carbon tax, you can expect the new Lamont administration in Connecticut to favor it.

Only you can stop the tax.

Your state senator or state representatives are public servants and they want to hear from you on this subject.  We urge you to testify against a carbon tax in any hearing, and to submit written testimony.  You can be sure the proponents of carbon taxes are lobbying their legislators heavily.  Watch this site to see what the incoming Lamont administration favors. 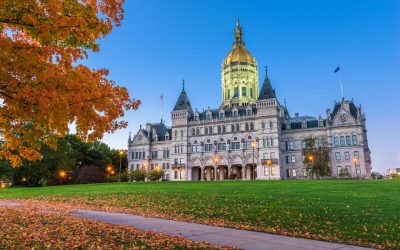 Raised Bill 1064, An Act Establishing a Carbon Price for Fossil Fuels Sold in Connecticut, is proposing a carbon tax scheme identical to carbon tax billed raised the previous two years in Connecticut and may be viewed here. In New Hampshire, H.B. 735 is a similar bill... 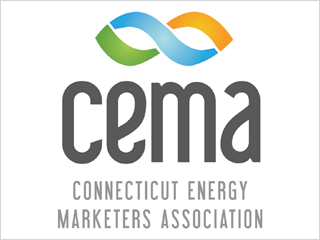 French President Macron Backs Down On Carbon Tax On Fuel

French President Macron Backs Down On Carbon Tax On Fuel